Thumbs up for innovation, IMA vegan ‘salmon’ sushi is a truly astonishing plant-based alternative to conventional sushi that looks and tastes just like the real thing.

Our seas and oceans are trouble, not only from plastic garbage and climate change but also from overfishing. Anyone striving for a more sustainable diet shoud aim to eat less meat and less fish as nearly 90% of the world’s marine fish stocks are now fully exploited, overexploited or depleted.

IMA was founded in 2017 by Jessica Chan who set out to reinvent sushi vegan-style. Jessica had been making sushi from a very young age but, after going vegan, quickly became disatisfied with the selection of plant-based sushi options out there.

IMA vegan ‘salmon’ sushi is made from konjac, an Asian tuber plant often used as a gelatin substitute, layered with coconut to replicate the appearance of sliced salmon. IMA sushi is then handrolled in their London kitchen using traditional bamboo mats.

I sampled the range last week and was really impressed. For once, the vegan ‘salmon’ does not only look really realistic but also has an identical texture to real salmon. I found the taste to be slightly less fishy than conventional salmon. However wrapped in nori and once dipped into soy sauce, I could not tell the difference between Ima vegan ‘salmon’ sushi  and traditional sushi.

WE CAN MAKE A DIFFERENCE. ?⠀ ⠀ We wanted to do something amazing for #plasticfreejuly this year and you’re helping us do this!! ⠀ ⠀ We’re donating 10% of our sales this month to @surfersagainstsewage. They do amazing work to fight against plastic pollution in the UK and we LOVE that they have a plastic free school for children. They inspire and empower the next generation of ocean activists ?⠀ ⠀ Let’s see how much we can raise!! Together we can change the world. ⠀ ⠀ Comment ‘?’ below if you want to end plastic pollution. #bethegeneration #bethechange 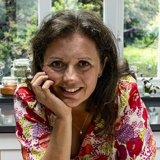 A food enthusiast, Annabelle Randles loves cooking all type of cuisines and experimenting with flavours, herbs and spices. French carnivore by birth she is now a flexitarian and truly enjoying it!